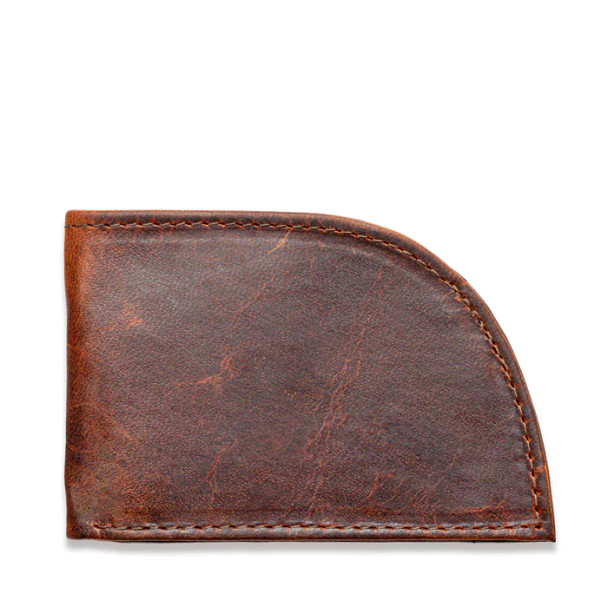 Crafted from genuine moose leather in New England. You're not going to find one like it anywhere else!

Holds cash, credit cards, and your driver's license very comfortably and securely–because it was designed to fit in your front pocket perfectly.

The Story of Rogue Industries
Since their founding in 2007, Rogue Industries has been a design project. Their founder, Michael Lyons, was unhappy with his bulky back pocket wallet, which he was convinced was causing his lower back pain. So, he decided to do something about it.

Michael came up with a wallet design that was shaped to fit the front pocket in pants. He even obtained two patents on his innovative design. He made prototypes to show friends and family. He got immediate and encouraging feedback as product testers thought it was a smarter design, safer from pickpockets, and a much more comfortable way to carry. So Michael decided to go for it. As the company grew, he exhibited at trade shows with a wallet that didn't look like any other. And that's how Rogue Industries was born.

MSRP:
Now: $24.99
Was:
Size: About 2" x 2" Danforth Pewter, Handcrafted in the USA Fred and Judi Danforth founded Danforth Pewter in 1975 in Vermont, reviving a family tradition that stretches back to the pewter...

MSRP:
Now: $19.95
Was:
"New England" is hand-painted on the base High-quality Christmas ornament Made with resin

MSRP:
Now: $19.95
Was:
MADE IN NEW ENGLAND! The Moose Keyring is handcrafted in Middlebury, Vermont. Each Danforth Pewter keyring comes on two split rings. Measures 2 inches tall, plus the key ring Two-sided design About...

MSRP:
Now: $3.99
Was:
InsideBlank About the ArtistMary Graves was a long-time and celebrated New England folk artist who created one-of-a-kind cards of whimsy and beauty, with an attention to detail that is quite...

MSRP: $81.83
Now: $59.97
Was:
GIVE THE GIFT of NEW ENGLAND! The Yankee Holiday Gift Box was created to delight fans of New England all year long. Whether one calls the region home or just dreams of visiting, our collection will...

MSRP:
Now: $19.95
Was:
"New England" is hand-painted on the base High-quality Christmas ornament Made with resin